We have a constant reminder that warfare brings with it a high cost. On the village War Memorial are named seventeen Fovant men who did not return from the First World War and a further five who perished in the Second. Many are remembered only as names on the many memorials to the missing in foreign countries. Others lie in named graves from Norway to Italy and from France to Burma.

However, this was not all of the loss experienced locally. In St George’s churchyard are sixty graves of soldiers who died, either of wounds or illness, in the military hospital here during or shortly after the 1914-18 War.

Thirty-nine of these graves are those of Australians. The Fovant Badges Society has a strong bond with the Australian Military Forces, who invariably send a representative to our Annual Drumhead Service of remembrance. The graves are immaculately kept and are often visited by people from Australia.

Kelly’s Directory of 1931 records that:

“In the churchyard is a cross of sacrifice erected by the War Graves Commision in memory of the men buried here who died on service during the GreatWar”.

There is also another memorial outside the Village Hall. Each November people of all denominations still gather around, while the Rector conducts a service of remembrance and poppy wreaths are laid in memory of those who died as a result of war. Each summer, for over forty years, Fovant Badges Society has organised a Drumhead Service at the foot of the downs beneath the badges, to commemorate the lives of the people who were stationed here during the First World War and, by extension, all other ex-service people.

This is conducted by a visiting clergyman and attended by British Legion members, service personnel, old comrades, local dignitaries and villagers. British Legion and Regimental standards are paraded. Pausing before the War Memorial at the Fovant Village Hall, have you ever wondered about the men whose names are recorded there? The reaction of most of us would be a perfunctory sadness soon forgotten as we got on with our busy lives. However, these men are more than just their names, many of which are still familiar in the village today – unquestionably they deserve to be remembered as people.

Rather than just seeing engravings on stone it seems fitting that we should endeavour to find out a little more about these young men who met such a violent and untimely death in defence of our freedom. To that end we are trying to assemble a collection of photographs of those whose names are inscribed on the memorial, and, where possible, to record something of their early lives, their wartime experience and their final resting place.

We have been loaned a few photographs, which we have copied and returned. We have also acquired a brief obituary of one or two of the men. Additionally, thanks to the Internet, we have found where most of the men were either buried or remembered on other memorials. These are lovingly cared for by the Commonweatlth War Graves Commission. Of those men who fell during the 1914-18 war, most are buried in Belgium and France. However, War Cemeteries may be found all over the world, so some of our men rest very far from home.

One of the tragedies of modern warfare is that so often the dead have no known grave. This was particularly true of the men of Fovant, nine of whom are commemorated as names on memorials to the missing. Such memorials are equally far flung.

The gaps in this research are obvious. We would be very grateful for any help in this endeavour. Meanwhile please click on any of the names below to go to that part of the pages to find out what we have discovered. 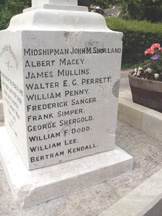 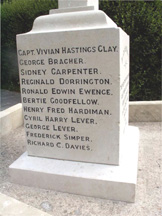 Where we have extra information or photographs on our war dead, these may be found by clicking on either of the World War headings below.

Eighty-two men from Fovant are recorded as having served in the 1914-18 War, of whom 23 served in the Royal Navy (including the Royal Marines) and 59 in the Army. The proportion of those who served in the Navy seems quite high for an inland village with no naval tradition. Perhaps it shows the high regard of the Royal Navy in the first part of the twentieth century.

The 17 men recorded on the War Memorial represented 21% of those who served, 5 in the Royal Navy and Royal Marines and 12 in the Army. The proportions of the dead in each service were within a percentage point of those who served. It is sobering to think that over a fifth of the men who left Fovant to serve in the war never came back.

Most of the men who died were aged between 20 and 30, although three were under 20 and one over 40. Three men died before 1916, including George Bracher , Fovant’s first casualty, who was killed, with the Coldstream Guards, in the first battle of Ypres in November 1914. The number of deaths then rose to five a year before falling to four in the last year of the war. That final figure highlights a particular tragedy for Fovant, and indeed for Wiltshire, in that Reginald Dorrington and William Penny died on the same day when the 1st Battalion of the Wiltshire Regiment was overwhelmed at Bapaume by the Ludendorff offensive of March 1918. Only three officers and 54 other ranks of the battalion survived the fighting.

The 1st Battalion was hastily reconstituted from the 3rd Battalion, which was a training and holding unit, and fell back to the Ypres area, right in the path of a second German offensive in April 1918. Amongst those then killed was Christopher Usher , who had already been wounded twice and probably had been withdrawn from the line to rest. He was the son of the Reverend Robert Usher, Rector of Fovant from 1919 to 1942, who was to lose another son in a flying accident in 1924 and yet another in the Second World War . Although Christopher Usher’s name does not appear on the War Memorial there is a memorial to him in the parish church.

Of those who were killed in the Army, practically all were serving in the Infantry and most of those in the Wiltshire Regiment. The 1st Battalion arrived in France nine days after the beginning of the war and served on the Western Front thereafter. George Shergold died with them before the second battle of Ypres in 1915. The 2nd Battalion also served on the Western Front from October 1914. Vivian Clay was killed in 1916 when the battalion was fighting on the Somme.
The 5th Battalion took part in the Gallipoli campaign, where Frank Simper died of exposure in 1915, and then went on to Mesopotamia, where Ronald Ewence died of wounds in 1917.

Of those soldiers not belonging to the Wiltshire Regiment the only one from Fovant to be killed who was not in the Infantry, Albert Macey , was a member of the Corps of Royal Engineers. Possibly he died of wounds as there was a large hospital centre at St Omer, where he was buried in 1918. James Mullins was serving with the London Regiment (Queen’s Westminster Rifles) when he died in 1917 at the Battle of Arras and Walter Perrett was killed during the third battle of Ypres, also known as Passchendaele in 1917. He was serving with the Duke of Cornwall’s Light Infantry. It is not known whether they joined these regiments originally or whether they were drafted from elsewhere to replace casualties.

Of the naval casualties, three were lost at the Battle of Jutland in 1916, all on different ships. George Lever and Frederick Sanger were serving in the Royal Marine Light Infantry, in HMS Tipperary and HMS Black Prince respectively. George was Fovant’s oldest casualty, he was 43, whilst the youngest, John Shorland another Rector’s son, was only 17 when he was lost with HMS Invincible. Two of the other sailors were also lost at sea, Bertie Goodfellow in HMS Hampshire sunk by mines NW of Scapa Flow whilst taking Lord Kitchener to Russia in 1916, and Cyril Lever in the North Sea on convoy duty in HMS Mary Rose in 1917. The other sailor, Henry Hardiman was also killed in 1917, at Passchendaele whilst serving as an Able Seaman with the Royal Naval Division. In the memorial in Fovant church he is listed under “Army”.

One of the tragedies of modern warfare is that so often the dead have no known grave. This was particularly true of the men of Fovant. Nine of them, over half, are commemorated as names on memorials to the missing. Those buried lie in cemeteries cared for by the Commonwealth War Graves Commission, mainly in France or Belgium, but others as far afield as Turkey and Iraq. George Lever rests in one of only seven named graves of sailors from the Battle of Jutland in a small cemetery in Norway.

One man, Sidney Carpenter , has not yet been traced. Eight Sidney (or S) Carpenters are recorded by the Commission but none of them can be traced to Fovant, or to the Wiltshire Regiment. Six of the eight were infantrymen, one Royal Garrison Artillery and one Army Service Corps. Reginald Carpenter, Sidney’s brother, returned safely from the war and, it is believed, lived and worked as a Dairyman at Green Drove.

The 5 men recorded on the War Memorial were again predominantly in the Army, with one each from the Royal Navy and the Royal Air Force.

Not all of the ages are known, most were probably between 20 and 30. The oldest, at 33, was William Usher, youngest son of a previous Rector of Fovant. His name is not on the War Memorial although he is commemorated in a window in the church.

In the Second World War, unlike the First, most of the Fovant Army dead were not in the Infantry, but the Royal Regiment of Artillery. Whether it is a coincidence, or whether there was a local recruiting campaign early in the war is not known, but all the artillerymen who died were serving with Antiaircraft regiments. The one Infantryman was William Lee , who is buried in Fovant churchyard. He died of wounds following the campaign in 1940 that led to the evacuation of the British Army from Dunkirk. He served in the Duke of Cornwall’s Light Infantry.

Two of the artillerymen died in the Far East, Archibald Kendall in 1944 and Frederick Simper in 1945. Archibald’s death is recorded on the Singapore Memorial and he was tragically killed when a Japanese ship carrying POWs was sunk by a US submarine. Frederick is buried near Yangon (formerly Rangoon) and he died just four days after the Japanese evacuated the city. The third artilleryman, William Usher , died in Italy on the last day of 1944, and is buried in Florence. There was fighting in the Appennines that winter prior to the final assault on the Gothic Line in April 1945.

The only member of the Royal Navy from Fovant who died in the Second World War was Richard Davies . He was lost in 1941 when HMS Barham, a battleship, was torpedoed in the Mediterranean when returning to Alexandria from convoy duties. His name appears on the Portsmouth Memorial.

The First World War had brought no deaths to Fovant from the newly formed Royal Flying Corps, but its successor, the Royal Air Force, claimed one in William Dodd . He was a Sergeant/Air Gunner in 205 Squadron and was probably flying in a Catalina maritime patrol aircraft despatched to search for a Japanese fleet attacking Ceylon when it was shot down. He had already escaped from Singapore and, ironically, his name appears on the Singapore Memorial.