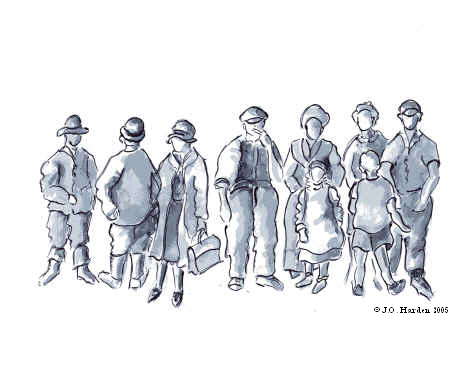 There are several meanings of the word interview, but that which best fits my historical research activities in this area is, ‘a meeting of people, face to face, especially for the purpose of consultation’. The people I wished to meet face to face were the older residents of our village, and my reason for consulting them was to record their memories of times gone by.

My first interviews, carried out in the early 1990s were paper and pencil affairs, but I quickly moved on to a portable tape recorder. Written records of interviews have the advantage of not needing transcription but the tape recorder has the advantage of catching every word of the person recounting their experiences, which easily outweighs the tedious task of later transcription.

The children of the 1901 Fovant census, parents and grandparents in their turn, have responded willingly to the question ‘what was it like when you were young?’ and much has been gleaned from listening to the childhood memories of these older villagers. Recorded interviews with representatives of the Turner, Wyatt, Green, Foyle, Burton, Lee, Simper, Hardiman and Coombs families, telling of their lives in early 20th century Fovant, have the added bonus of the authentic Wiltshire accent.

Most people enjoy talking about their childhood, and I certainly enjoyed listening to the tales they told, and have been grateful for their co-operation. The importance of such oral evidence cannot be overstated – there is nothing to equal the account of someone who was there, given in the words of an eyewitness.

However, a certain caution should come into play when interpreting the material gathered. An overwhelming desire to say what the listener would like to hear can slant the conversation. The interviewer could ask a leading question. Depending on their standpoint, happenings could be exaggerated or played down as people interpret the same event in different ways. Such variation in itself is important because negative evidence can be just as useful as positive. The bottom line is that everything that is told is valuable, for each little piece of information helps to make up the whole, bridging the gap between ancestors and descendants.

Several of my early interviewees are no longer with us, a situation that emphasises the need to record as much as possible while the opportunity remains.