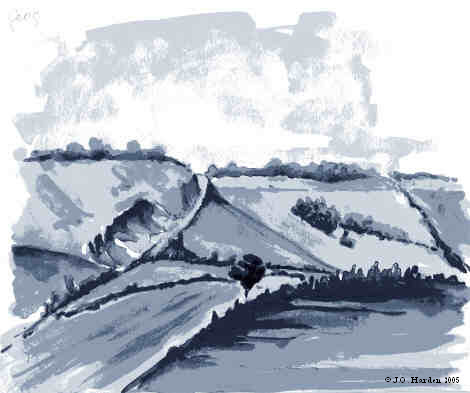 An appreciation of the varied scenery surrounding Fovant, from rolling downland to flat terraces and wooded slopes, can be gained by taking a walk from the top of the downs to the southeast of the village, where there was once a turnpike road, down the steep chalk slope and across the gently-rising terrace, where agriculture is prominent, before again walking down over the steep north-facing wooded slope towards the Nadder and its alluvial soils, water meadows and mills.

This scenery reflects the underlying geology, which is interesting, as the village straddles the boundary between rocks typical of the Vale of Wardour, such as Chilmark limestone, and those of the chalk countryside. It is somewhat difficult to imagine that Fovant owes its site to happenings of up to 60 million years ago but crustal movements were in progress then on the continent of Europe which resulted in the uplift of the Alps. Over here, but somewhat later, the ripples produced lower arches or anticlines connected by shallow troughs, and the northerly formation of the arches still show a steep northern limb with a gentle inclination on the southern sides as seen on the walk suggested above.

To the south, the underlying rock is most obviously Chalk, that landscape feature which is apparent from the Dorset Downs, across Salisbury Plain and to the Marlborough and Berkshire Downs and beyond. Chalk hill-figures, of which Fovant has more than its fair share, are common in this landscape. This material, over 1,600 feet thick, was laid down from marine deposits during the Cretaceous period, some 100 million years ago. Nearer to the village, however, the picture becomes more complicated as older rocks become exposed.

Fovant itself is in a north-south valley and a wide terrace of Greensand bounds it on both east and west. This terrace was ideal on which to site military camps during World War I, signs of which may still be seen. The green-tinged stone was obviously used to build many of the older cottages in the village and several overgrown quarries are still discernible. Greensand also dates from the Cretaceous period, although of a lagoon rather than a marine environment.

The brook running through the village, which rises in springs at West Farm, has eroded the Upper Greensand, exposing Gault, where the deposits are mostly clays, and Lower Greensand, where sandy beds predominate. The Gault clays underlie most of the area from St George’s Church and Glasses Lane to the Village Hall and form the upper northern slopes of Fir Hill and Great Ground Hill, whilst Lower Greensand is a narrower strip, lower down on those slopes. The brook itself contains water that is pure enough for the cultivation of watercress and old records speak of water mills. It is now a popular fishing stream, accompanied by artificial shallow lakes and a fish farm.

The erosion continues in the valley of the River Nadder into which the stream flows, exposing other rock, the Wealden beds, or grey loam, which are the earliest deposits of the Cretaceous period and represent the boundary between that period and the fresh-water deposits laid down in the Jurassic period.

Deposits north of the village represent the most easterly exposures of the rocks known as the Purbeck beds. These limestones are common in the nearby Vale of Wardour, together with the older Chilmark stone. They were deposited some 170 million years ago.

The area was not covered by a sheet of ice during the Ice Age, but the changes occurring then in climate and sea level influenced the deepening and widening of river valleys. Evidence of Early man has been found in the Avon and Stour valleys, so it is likely that the Nadder valley contains similar evidence.

The following second inter-glaciation period was seemingly the longest but both the third and fourth glaciations were less obtrusive and time following allowed the formation of the present basic appearance of the U.K. 5000 BC would seem to date the severance of Britain from the continent with the linking of the North Sea and the English Channel; and allowed the establishment of the Atlantic type of climate.