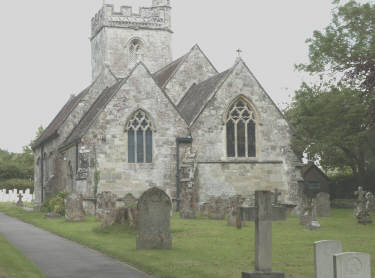 The building is ‘listed’ with dates ranging through the 13th, 14th and late 15th centuries. The following extracts from previous researchers give some idea of the physical fortunes of the actual building:

‘In 1267, the first mention of a church building in Fovant is contained in the will of Robert de Careville, treasurer of Sarum, which says ‘ … to supplying a deficit in the church at Fofunt, 20 solidos – to the poor of the same parish, 20 solidos’. A list of Fovant incumbents from 1305, starting with the Norman-sounding name Rob. de Hulcott, indicates that a Christian church existed in the village at this time.’

At the Quarter Session Held in New Sarum on the 9th January 1654 the Minister and Churchwardens Of Fovant presented a plea for help to the Justices of the Peace:

‘ … that whereas the parish church of Fovant has for a long time been decaying for want of due and timely repair and is now in our apprehensions in so dangerous a condition that unless the sudden provision be made for the support of it we have just reason to fear least a great part of it may fall down … some small matters according to the present necessity have been done already in removing the Pulpit and reading seat from a place of danger wherein they stood, to another place more secure…’

From the Clay Papers

‘The south aisle is said to have been built or re-built by Lady Cicely Bodenham, last Abbess of Wilton … in 1534 she was promoted to be Abbess of Wilton …There is a belief that she was selected as abbess because she was a person who would give but little if any, opposition to the surrender of the temporalities of the convent to the Crown … and they were quietly given up on the 25th March 1539 … There is a tradition that the Lady Cicely and some of her nuns [then] went to Fovant to live.’

W.L. from a historical sketch of Fovant printed in the Salisbury Journal – 188

Fovant is a Rectory, valued in the King’s Books at £17. Patron, the Earl of Pembroke.

The Church, dedicated to St. George, is well built of stone, with an embattled turret, and handsome open cornice. On the South side of this turret are two windows of pointed architecture, on the lowest of which are two niches, with canopies and pinnacles over them, and intended originally for images. The labels from which they spring on the West door-way are angels. The lower parts also of the niches in the tower are supported by angels; the tower is placed at the West end.

After having visited the little churches of Ansty, Swallowcliffe, and Sutton Mandeville, this church of Fovant assumed a great degree of interest, especially in its interior, which consists of a nave and two aide-aisles, with a chantry-chapel South of the chancel. The North aisle is separated from the nave by four pointed arches, springing from round columns. The South aisle presents only three arches, springing from octangular columns without capitals, and not so well formed. The windows in the aisles are chiefly of the flat pointed style. A pointed arch separates the nave from the chancel. There is nothing remarkable in the font.

from “History of Wiltshire – Vol 4” by Sir Richard Colt Hoare.

‘The original building was Norman, and some remains of it still exist, but it is possible that a wooden church built by the Saxons, who founded the village, stood on the present site. The church however was rebuilt in the 15th century, when the Perpendicular style of architecture prevailed. The framework of the priests’ door, leading into the chantry chapel, is a relic of the original Norman church. It was found in fragments in the south wall when the fabric was restored in 1863–4, and Mr Wyatt, the architect, reconstructed it and placed it where it now stands.’

‘The present Church is based on a Norman structure. Some remains of this Norman building still exist …built of the local Chilmark stone…the exterior is in the Perpendicular Style and largely dates from the fifteenth century changes when the Tower and South Aisle were added… In 1863 the Church was extensively altered, particularly the interior, under the direction of Thomas Henry Wyatt, who was then consultant architect for churches in the Salisbury diocese… the battlements having been seriously damaged by the hurricane which swept across the South of England in October 1987, parts of the frieze were replaced by Salisbury Cathedral stonemasons, still using Chilmark stone.’

Our church having survived many changes over the centuries continues to play an important part in the life of the village today.

Click on the links below to find more information on the Parish Church:

Restoration of the church and its tower

Treasures in the church interior

Scratch dials on the exterior of the church

Visitors to the church