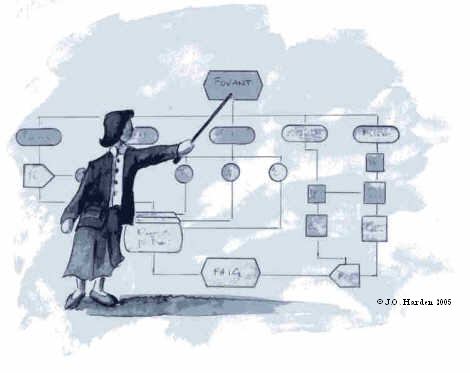 Probably the earliest groups to be formed in Fovant were those organised for mutual help in times of need. The Fovant Club or Fovant Friendly Society was a sick benefit club which was established in 1767 and ceased in 1911. Its headquarters were in a long, low room on the second floor of the Cross Keys Inn. Club Day was held once a year, always on Ascension Day, and reports of these thoroughly merry affairs appear regularly in nineteenth century editions of the Salisbury and Winchester Journal, such as this one dating from 31st May 1851:

‘Thursday last being the anniversary of the Fovant old-established Friendly Society, the members met at the clubroom and proceeded to church in an orderly manner, preceded by their honorary members and an excellent band of

music, where the Rev. G. Baker delivered an impressive discourse suitable to the occasion, which seemed to rivet the attention of all present; after which they returned in the same manner, and partook of an excellent dinner, served up by Mr. and Mrs. Ferris at the Cross Keys Inn. They then paraded the village, calling at the houses of their honorary members (the band playing many national and favourite airs) who in return regaled them with a plentiful supply of cider and good brown stout. The orderly conduct and respectable appearance of the members were very praiseworthy, and the utmost harmony and conviviality prevailed throughout the day.’

The Slate Club was also a provident club through which members insured against illness. Charles Turner, a woodman on the estate of the Earl of Pembroke, who kept a diary from 1899–1900, records a meeting of the club on 21st June 1899, although no details are given. The Slate Club was still in existence in 1953 as recorded by Dr. R.C.C. Clay in his description of the village on Coronation Day.

The Fovant Provident Pig Insurance Society , otherwise known as the Pig Club, was set up in 1902 with the object ‘to insure against loss the Pigs belonging to the Working Men of Fovant’. The first President was Sydney Lever and the Secretary was Thomas Wyatt. If any pig insured by means of the Club should fall sick, two members of the Committee would inspect it to ascertain if the illness was due to neglect or ill-treatment. If a pig died, it had to be valued by two Committee members (or the butcher if the members were not available) and the market value was paid to the owner from the funds.

It is interesting to note that Rule 12 stated that ‘any member heard swearing or using bad language at any meeting of the Society shall forfeit threepence for each offence…to go to the funds’ which seems to be an early version of a ‘swear box’. In his diary, Charles Turner recorded that on 19th October 1899 the Fovant Pig Club Supper was held. So, as with the Friendly Society, it can be seen that membership of these organisations brought access to social events as well as practical benefits to individuals.

Practical benefits to the community might also be forthcoming, thanks to the formation of crime prevention organisations, such as the nineteenth century Fovant Association for the Prevention of Crimes. A similar function is performed by the current Neighbourhood Watch scheme, formed of sixteen volunteer co-ordinators who are managed by Parish Councillor Mr. Tony Wells. In its early years the scheme was well resourced by the Salisbury-based leadership, but more recently its incorporation with Tisbury, under management from Wilton, has coincided with reduced availability of information and documentation.

The Three Towers community magazine is therefore often used as a means of publicising the aims and activities of the scheme. The co-ordinators’ reporting of unfamiliar vehicles and suspicious individuals, either noted by themselves or passed on by villagers, has indeed led to arrests, proving the benefits to the community.