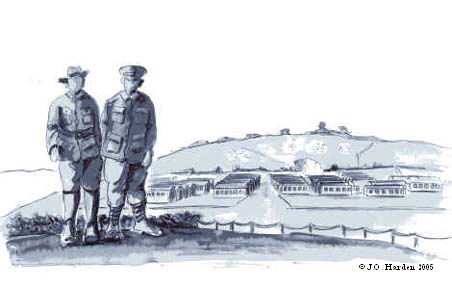 In the First World War of 1914–18 the village experienced the impact of large numbers of soldiers, when several camps were constructed to the north of the downland that stretched from Barford St Martin to Swallowcliffe. A light railway, a hospital, a cinema and more shops made their appearance.

The camps contained soldiers from many parts of Britain and Australia who were destined to serve on the Western Front in France and Belgium. After the war, the camps were used as a demobilisation centre.

There are still signs of those camps even now, almost 90 years later. A journey along the old Turnpike Road (which is still a byway) that surmounts Fovant Down, above the regimental badges cut into the chalk by those bygone soldiers, will enable you to see signs on the ground, particularly when the sun casts long shadows.

Our Secretary went there and took the photograph below. With the aid of the key you may be able to see the marks on the ground where the camps once stood. You may also faintly see the track which the old single-track railway took. The photograph was taken from Chiselbury Camp, above the Badges, looking north towards Salisbury Plain. The buildings in the lower left corner are the farm buildings of East Farm. Beyond the field above them is the A 30, the main road between Salisbury and Shaftsbury, with a row of bungalows on its north side. Fovant village lies behind the trees on the far left running out of the picture.

A bridleway ,Green Drove, runs from the bungalows up to Fir Hill and it is in the large field to the right of this trackway that the squares of the camps can be seen stretching all the way across to Hospital Field (the golden, odd-shaped field on the right surrounded by trees.) These camps were known as Nos. 1, 2, 3, and 4. with camp No. 13 in the field south of the A 30 immediately under the downs.

Just south of Hospital Field is the Emblems Restaurant and Beer’s Garage and house. It was here that the railway terminal was sited. The railway track can be seen quite clearly behind the bungalows and crossing the field at an angle to intersect the A 30 and end north of the Restaurant and garage.

Back in 1916 another photographer stood up on Chiselbury Camp. He was an Australian soldier and his collection of photographs have been sent to the Fovant Badges Society. One of those photographs gives a valuable panoramic view of the whole stretch of camps, and from this panorama the following picture has been extracted, so that a comparison can be made with what can be seen today.

The layout of the camps

Although the camps eventually stretched from Barford St Martin to Swallowcliffe, those in Fovant were known as Camps 1 to 4, Camp 13, the R.F.A. (Royal Field Artillery) and R.E. (Royal Engineers) camps.

The following map shows their location, and by clicking on the thumbnails maps below, you can also see a plan of each camp. These plans were shown on the Estate Map accompanying the Sale Catalogue when most the village was sold by the Earl of Pembroke in 1919.

There was also a camp for the A.S.C. (Army Service Corps) nearer to Compton Chamberlayne and our Secretary took another photograph from Chiselbury looking in that direction The photo is taken from Chiselbury Camp looking north east towards Barford St Martin. To the north of the bungalow is the A 30, the main road between Salisbury and Shaftesbury.

To the north of the road is the field in which was the A.S.C. Camp. The first field has been ploughed for many years but there are still some interesting crop marks to be seen. The green field to the north of it shaped rather like a ‘Z’ has been used as a grazing field for sheep because there was too much concrete and brick left after the demolition of the camp to make ploughing an option. Here deep hollows and humps where stables and huts stood can still be clearly see when walking the field. The sturdy brick and concrete sump holes still clearly visible.

Leisure in the camps

A sample of wartime postcards