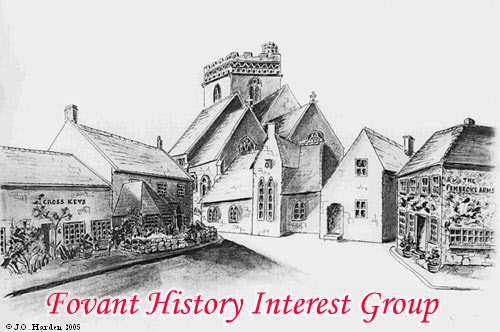 Our group, FHIG for short, was specifically formed to research the history of Fovant. Members follow their own interest in a particular area of the village’s history, and report at our meetings. The puzzle pieces of our logo represent the snippets of information we discover. Sometimes the pieces fit together, more often they don’t, but they all add to the sum of our knowledge of the village. The format is circular because research, like history itself, never ends.

History, having no absolute beginning or ending, has, in the past, presented the problem of how it should be recorded. Some historians specialised in depth on a given subject, person or event, others researched more generally over a longer period of time. All had to be ‘written up’ – a daunting task for any one person. Today we are more fortunate, for in this age of information technology this problem can be ameliorated by the setting up of a website, which has the supreme advantage of being both flexible and open-ended.

Our aim in setting up our website is to encourage the active participation of all who have some interest in Fovant. Even small pieces of information are useful, for they may just be the one bit that we need to join other pieces together.

Anyone can contribute – adult, child, villager or any member of the wider national or international public – all can play a part in helping us to research the history of our village.

Like many other small, enclosed, rural communities, the village of Fovant was relatively bypassed by the larger historical events of national concern. However, the village was not entirely cut off from outside influence, so it is worth noting any village contact with such events within the context of our own parochial history.

Fovant is so hidden from view that you would be hard pressed to know that it is there. It is not only invisible from the top of our Downs, but even a traveller passing along the A30 road would hardly notice it. The village itself, nestling in its own little valley at right angles to the major road, sits on an interesting array of different types of rock. Water is plentiful, as witnessed by springs, a brook and several man-made lakes. Man has also imposed his mark on the village in the shape of the various boundaries, enclosures, roads and footpaths which either surround, or run through, the village. Documentation of the geography of the village ranges from the Anglo Saxon Charters, through a proliferation of 18th and 19th century mapmakers up to the present day.

There is some indication of Early and Middle Bronze Age settlement on Fir Hill and Chiselbury. Evidence of Roman influence in the area is also indicated by the discovery of a Romano-British bust in Sutton Mandeville and some small finds connected with the three stone cist burials, found on the hill above the north end of Dinton Road. Broadly speaking though, the village was scarcely inhabited until the Early Middle Ages when the Saxons invaded Britain. The Saxon Land Charters of AD 901 and AD 904, each mention Fobbefunta , the Saxon name for Fovant.

By the tenth century most of the country had the essential framework of central and local government already in place in which, for administrative purposes, the country was divided into counties and then subdivided into Hundreds. Each Hundred, an area thought to contain one hundred dwellings, had its own county court and its sheriff and his officials ran the county, or shire as it was more generally known at the time. After their conquest of the country the Normans continued to use this efficient system in order to impose their own rule on the country. Undoubtedly this governmental structure would also have proved its worth during the production of the Domesday Book in which the conquerors listed all the country’s goods and chattels.

During this period Fovant’s original church, thought to have been sited over an earlier Saxon place of worship, was built. No date is known for this church, but its first incumbent, Rob. de Hulcott, was listed as being in office in 1305. By the 15th century this church needed rebuilding and it was at this time that the church tower was added.

At the dissolution of the monasteries in the 16th century, the Abbess of Wilton, dispossessed of Wilton Abbey, was granted lands, a pension and a house in Fovant for herself and some of her nuns. Wilton Abbey, its lands and wealth, were then given to Walter Herbert, who later became the 1st Earl of Pembroke. As Fovant was one of the villages which came within this ‘gift’, Walter Herbert became its feudal lord, with all that the title entails. This situation remained largely unchanged until the sale of Pembroke lands in August 1919.

Religious dissent had a further impact on Fovant during the latter part of the 17th century, when a group of Quakers became active in the village. By the end of the 18th century they had moved away. They were followed in the early 19th century by a religious group calling themselves ‘Dissenters’.

By this time the Lower Road, currently the A30, had been turnpiked, superseding that which went over the Downs as the major road to the West. Carriers, passenger and mail coaches plied to and fro between local towns and villages. Employment opportunities were expanded and were further enhanced by the mid 19th century opening of the Salisbury and Yeovil Railway, with its station at nearby Dinton. Although people could now move into and out of the village for a host of different purposes, statistically the population remained relatively constant until the mid 20th century.

Self-help in the form of various provident societies had always played a large part in village life. Fovant was also fortunate in having had a resident medical man since the late 18th century. Our school was opened in 1847, well before the Education Act of 1870 required the provision of educational facilities for all children. A village constable was noted as resident in the 1841 census, a sub-postmaster is listed in Kelly’s Directory of 1855 and our Parish Council was set up in 1896.

During the Great War of 1914-18 Fovant, along with nearby villages, became the site for a very large military camp. Built at the foot of our Downs, an endless array of huts housed large numbers of soldiers. These men, though mainly in transit, still found time to carve their regimental badges on the Downs. The effect of their presence on the village was immense and lasting. The 1939-45 war largely bypassed the village in the military sense. However, we did have our own Home Guard unit, there was a searchlight battery in a field beside the Poplar Inn, and at least one German aircraft crashed nearby. Fovant also hosted some unaccompanied evacuee children.

Our first social housing was built in the 1930s. Mains water was finally installed throughout the village by 1950. Electricity provision, started in 1931, was extended in the 1950s and completed its final phase in the early 1960s. A modern drainage system also relieved the village in the early 1960s. With all services now in place, many new houses were built. The stage was then reached whereby no further development outside the existing village framework was possible due to the landscape constraints imposed. Consequently a lot of ‘infilling’ took place. Obviously an expansion of the population followed. Even so, the current population stands at well below the thousand mark.

The newcomers, blending into existing groups and organisations, brought a breath of outside air into the village. Invariably they joined in with the activities that constituted the social life of the village, and, in some cases, introduced new ideas which gave rise to the formation of new interest groups. We have a host of such clubs, covering a wide range of interests and activities, some of which were represented in the temporary Fovant Millennium Group which organised the village’s celebrations on entry into the 21st century.

Village social cohesion was aided over the years through shared experience, made possible through such inventions as that of the internal combustion engine, the telephone, the wireless, the television and the computer. The latest improvement in village communications, access to Broadband, a fast Internet service, brings those of us who wish it into instant contact with other people anywhere in the world. Fovant is no longer an ‘enclosed’ community.

This précis of our village’s history during the last two thousand years merely introduces the subject material of the pages on this website. You can use the ‘Contact us’ button if you would like further information.